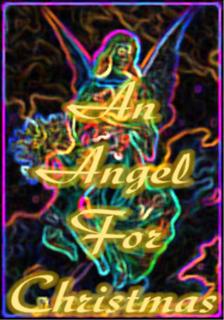 An Angel for Christmas

Elaine sat at the window, the cold pane pressing against her cheek. Rain streaked the glass, dripping from the eaves, as she watched him go. Tears ran unchecked from her eyes, but she ignored them, and they dripped unheeded from her chin. It was fitting that the heavens cried too, she thought dismally.

Mark climbed into the sedan without a backward glance, ready to start on a new life, he had told her. The woman behind the wheel - Elaine could just make out her blonde hair through the rain-streaked glass - leaned over to kiss him. Sickness and pain lurched in Elaine's belly, drawing an unconscious gasp from her. Who knew that it would hurt so bad to watch him go like this? She closed her eyes, trying to escape from the reality of it, but memories assaulted her behind closed lids.

Memories of him laughing in the sunshine, his head thrown back, mouth open wide in mirth. Seaspray misted the air around him as a wave crashed against the rock they had sat upon that day, so long ago. The day he had proposed...

Memories of him kissing her, their bodies fused together in passionate repose. The silken feel of his hair against her fingertips, the smoothness of his flesh next to hers. A fire, blood-red and hot as their passion, had crackled in the hearth that night, a year ago. The first night of their honeymoon....

Memories of the days that they had worked together, long hours stretching into the night that she had slaved over documents and manuals. Their first sale, then the many after, leading up to a multi-million dollar enterprise that she had started long before they had met. She knew that she had nurtured the business more than he had, putting in more hours and energy because she had wanted it to succeed, not for herself, but for him.

And for what? Now he had what he wanted, and he had left her. He had never loved her, she knew that now. Everything he'd said and done had been a lie! How could she have been so naïve?

The betrayal hurt worse than anything else. She realized now that she had never truly loved Mark, but she had certainly tried! He had not even done that!

"He's not worth it, you know." The deep voice startled her, making her jump. "He used you, it's a wonder you didn't see it before, Elaine."

"I know." she groaned, miserable.

The man came over to stand beside her, then gently put his arms around her, drawing her close. "Time will make the hurt lessen, and one day you will be grateful that he's gone."

"I know." she repeated, shuddering. "It just hurts so badly to be betrayed this way, Jason, so very badly. How could I have been so stupid?"

Jason Killkenney, her longtime friend and silent business partner, stroked her back. "You have never been stupid, Elaine, never. He used you, just as he's using her now, but he put on a fine show of it. Even I did not see through him completely until much too late."

"Oh, Jason, can you ever forgive me?"

"Hush, Elaine, there is nothing to forgive."

"But, he'll get half the business. Half! And it's all my fault. I should never have given him that last portfolio."

He squeezed her shoulders, and she looked up at him, her eyes wet with tears. A slight smile formed on his lips, and he shook his head at her. "He will get nothing, my dear, nothing at all."

Jason put his finger over her lips, stopping her.

"Shhh, trust me, he will get nothing. The papers that he took from you are worthless, I switched them weeks ago. The document that he signed, believing it was a settlement? Useless. Don't worry, Elaine, he will not be rewarded for his betrayal."

"How?" Elaine whispered against his fingertips.

"How did I know? Quite simple, my dear, I hired a detective to follow him."

For the first time in over two weeks, Elaine felt a smile touch her lips. She impulsively hugged him tight, her face pressing hard into his stomach. "Oh, Jase.... You are a gem!"

"Yes," he replied drolly, "And don't you forget it!" He hugged her back for a moment, then drew her up beside him. "Here now, I think you should rest for a while, it will do no one any good if you cry yourself sick." He pulled her toward the huge bed set against one corner of the room, but she balked.

"No, not there..." She had slept in that bed with Mark - the perfidious bastard - and he, in turn, had slept in it with his mistress. "I'll go to the other guest room."

"Of course," Jason picked her up in his arms, holding her close.

"Hush, just let me take care of you."

Elaine acquiesced quietly, thinking that she was just too tired to fight anymore. It wasn't worth it anyway. If she were honest with herself, she would have to admit that it felt good to be held in his arms, safe, for only just a moment. Jason had always been such a good friend. And right now, that's what she needed, a good friend. In all the time she'd know him, Jason had never been anything but kind to her. In the years that they'd been partners, he'd shown his friendship time and again. He was always there for her, always. The only time they'd every argued had been about her marriage to Mark. He'd been right, then, she knew it now. At the time, Jason had said that she was making a mistake, marrying Mark. Too bad she hadn't listened to him.

He carried her down the hall, past the Christmas tree ablaze with light, under the swags of evergreen boughs strung with tiny gold bells and huge silver bows that she had hung trying to get into the Christmas spirit, and into the second guest room. Ignoring her protests, he peeled away her outer garments and shoes, then tucked her solicitously beneath the covers.

"Sleep, Elaine, tomorrow is Christmas, and, as I am your only guest, I will expect you to spend the whole of the day with me."

"Thank you, Jason, for everything."

"You are quite welcome."

"I don't know why you put up with me, I really don't." Elaine murmured, touching his cheek with her fingertips before closing her eyes.

Because I love you? Because I have loved you for three years now? he thought, catching her fingertips in his grasp. He tucked the quilt firmly around her, then quietly left the room.

That damned bastard had ruined the holiday for her, but Jason wasn't saddened by that fact. No, selfish friend that he was, Mark's confession had only made him happy. At least now she saw the man for what he was, a conniving shark lying in wait for the unsuspecting. Jason was thankful that he had set the detective on him when he had, otherwise the schemer would have gotten half of Wild Enterprises, just as Elaine had said. He couldn't have let that happen, she had worked too hard to let all her profits go to Mark.

Jason stalked down to the parlor, where a cheery fire burned in the fireplace. A huge seven-foot Fir stood in the middle of the room, sparkling with decorations and lights and tiny golden angels. Angels sat on the mantel, hundreds of them, some blowing trumpets, some playing harps. Elaine love angels, which didn't surprise Jason in the least. To his mind, she acted like one herself.

He was glad now that he had accepted her invitation to spend the holidays with her. Otherwise, she would have been alone when Mark had dropped his latest bomb today. Who knew what she would have done then?

He sighed, then poured himself a drink from the brandy decanter at his elbow. Love was hell sometimes. He threw back the drink, then leaned back against the upholstery, stretching out his legs toward the fire and closing his eyes.

Sometime later he awakened, disoriented for a moment. The fire had burned down, and the only light in the room came from the dying embers and the twinkling lights on the Christmas tree. Elaine stood in front of him, clad in only a short slip, her hair mussed from sleep.

"I'm sorry, I didn't mean to wake you, Jason. I just came down to turn off the tree."

Jason patted the space on the loveseat next to him, "Leave it on, it's beautiful. Come sit beside me."

She sank into the cushion beside him, curling her bare legs under her. "You know, you were right, I don't feel nearly so bad as I did earlier. Did you know that it is snowing?"

Jason pulled his gaze away from her legs long enough to glance out the large picture window. Snowflakes, huge and wet, drifted down from the sky to settle on the ground. A white Christmas, something he hadn't seen in a good long while.

"It looks so peaceful, doesn't it?" Elaine sighed, then shivered.

"C'mere, you're getting cold," he draped an arm over her shoulders, drawing her closer to the warmth of his body. How could it be that he was so physically aware of her, and yet she didn't notice him at all? Except as a friend? It had always been that way between them, sometimes frustrating him beyond bearing.

"I'm so glad you're here, I don't know what I would have done without you tonight." Elaine whispered, her head against his chest. "Merry Christmas."

"Merry Christmas to you too, and you're welcome. I'm glad to be here."

Her fingers toyed with the buttons of his shirt, and he felt her smile against his chest.

That's two! Two smiles in two weeks, not bad considering how things had gone for her lately. Mark had been gone for months, only reappearing in the last two weeks. Elaine, soft-hearted as she was, had taken him in, no questions asked, even thought their divorce had been final for days. He had said he needed a place to stay, just until he was back on his feet again'.

Five days ago she had invited Jason for dinner. On the way home from the office they'd stopped at the market together, then went on to her house, and found Mark and his mistress locked in a torrid naked embrace on the kitchen countertop. Elaine had been outraged, and had insisted that Mark leave. They weren't married anymore, but he should have at least had some respect for her and meet his mistress elsewhere!

Today, on Christmas Eve, Mark had told her about the settlement.

"You are always there for me. Always. Why is that?" Her fingers trailed across his chest now, leaving the button and playing with a wrinkle in his sleeve.

Jason cleared his throat as emotions rushed through him. Risking it all, he mumbled, "Because that's where I always want to be."

"Do you know what I want for Christmas, Jason?"

Disappointment knifed through him, she had not caught his meaning. "No, what?"

"An angel," she sighed again, then turned her head to look up at him.

He couldn't help but chuckle, even though his heart felt as if it were breaking. "An angel, hmm? Now where am I going to find one of those?"

She rose up on her knees, still enveloped in his one-armed embrace. "You don't have to find one, I already have. He's been here all along, and I just haven't noticed. Do you think he'll forgive me for that?" Her lips hovered over his for a bare second before she kissed

Janean Nusz (Janean L 'Voe) lives in the Midwest where she juggles freelance writing with home, family and a full-time job. In addition, she also teaches workshops for her local Recreation Commission on the subjects of computer technology and writing.